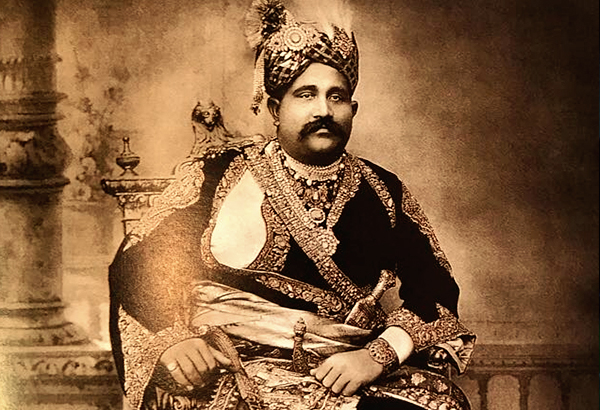 Since ancient times, men as well as women have adorned themselves with various ornaments. Women have had a special affinity for gold jewellery; their ornaments have been noteworthy and widely available across the length and breadth of the country. However, men’s jewellery, though less common, has had its own charm.

This article will talk about the intricate artwork of the gold jewellery designed for men during ancient times, showcasing power, dominance and masculinity.

The Sarpech was crafted predominantly as a male ornament. This was a Pagri (turban) ornament, topped by a paisley crest with elongated emerald drops. It showcased Jaipur enamel work in a unique fashion. The gold Sarpech was tremendous popularity during ancient times.

Linked by a series of heavy gold chains, Shinka is worn particularly by the Kings and Mughal emperors of the ancient India. Shinka, alike Sarpech adorned the Pagri (turban), however, with an even more magnificent, majestic look. The ornament was constructed with gold and crafted with chains. The edges were covered with tiny golden bells that created a regal and religious effect.

Kadas are a form of bangle. The inner side of Kada are covered by floral designs of colourful enamel. This ornament is characterised by a dramatic design or pattern, such as intertwined elephant trunks, peacocks or crocodiles.

The list of jewellery historically worn by men is incomplete without the mention of Vanki, also known as Bazu-Band (armlets). Vanki are known for their inverted V-shaped design. The gold work can be seen on both sides, resembling a typical lotus motif pendant.

In addition to these ornaments, Kings and other royalty flaunted their wealth in the form of weapons such as Firangi (Sword), Katar (Dagger), Khanjar and shields. The hilt of these weapons was often encased in gold. These weapons were tucked into the belts of their attire, which made the hilt and the scabbard notably visible.

The majestic gold ornaments created a regal and mesmerizing effect that obliged the wearer to be in the limelight. One can easily experience the rich and eminent Indian culture and tradition through the ancient and unique men’s jewellery.

London fix refers to the setting of the price per ounce of several metals (gold, platinum, silver and palladium) by LBMA taking place via a dedicated conference line. This happens twice a day.

Gold is used in astronaut helmets in order to reflect infrared rays, while allowing sunlight to pass and yet keeping them cool.