The sacred daan (donation) of gold

Thewa jewellery – the pride of Rajasthan

Mangalsutra – the sacred thread of love

Indian weddings are usually tagged as “The big fat Indian Wedding”. This title aptly reflects the splendid celebrations of this sacred and grand occasion. In India, marriage is sacred and so is the symbol of marriage – the Mangalsutra, generally worn by women.

Among the diverse cultures of India there are many different symbols of marriage and these can vary by state, caste or community. Mangalsutra, a sacred thread of marriage, is a customary symbol of marriage which is predominant in almost all regions of our diverse country.

Here is a list of the different forms of Mangalsutra that can be found in different regions of India;

The Mangala Dharanam is the ceremony wherein the groom ties Thaali on his bride for the first time. This ceremony confers the title of “Sumangali”, an auspicious married woman. Thaali is one of the oldest gold ornaments of South India and has its mention in the description of the marriage of Devsena with Skanda, the warrior God. Thaali Kodi is also known as Thirumangalayam, Mangalyam, Thaaly or Kodi.

Thaali and minnu from Kerala:

Kerala has been referred to as ‘god’s own country’, and is home to Hindu and Christian communities as well as those from a number of minor religions. The God’s own country is the combination of Hindus and Christians with other minor communities. The Kerala Hindus’ Mangalsutra is “Thaali” while the Christians call it “Minnu”. A pendant with the symbol of Christianity, a cross crafted on a heart-shaped gold medallion signifies the concept of love. Interestingly, Minnu passes through seven strands of a thread which denotes the bride, the groom, the couple’s parents and the church.

Commonly, Mangalsutra is bought by the bridegroom’s family for the bride, however, this ritual is slightly different in Andhra Pradesh. The Pustelu, the Mangalsutra worn by Telugu brides, has two round discs each bought by the groom’s and bride’s family. These discs are entwined on a yellow thread or gold chain and are separated by black and coral beads. During the marriage ceremony, the groom ties three knots in the thread around the bride’s neck.

On the sixteenth day of marriage, these discs are united. This is a small ritual performed by the elder of the family or groom. It is believed that Pustelu should be hidden from the evil eye of another woman.

In the state of Gujarat, black beads linked with gold wires and an intricate gold pendant form the traditional Mangalsutra.

The Mangalsutra from Maharashtra state is similar to that of Gujarat, formed of two strands of black beads on gold wires with two small gold “vatis” (bowls). The two-strands of beads represent husband and wife. It is believed that the black beads keep the evil eye away. The two golden vatis signify the Shiva and Shakti.

Karthamani and Pathak are two separate forms of jewellery worn by the bride of the Kodava community from Coorg region of Karnataka. Pathak is the large gold coin pendant with an engraving of Lakshmi or Queen Victoria which has small round rubies studded on the circumference of the coin. This pendant is surmounted by a cobra that stands for fertility. It may sometimes also have freshwater pearls hanging from it.

“Karthamani” is a necklace that is worn with the Pathak. It is made of corals and gold beads passed over a thread. The thread can be replaced with a gold chain. A Kodava bride wears the Karthamani Pathak a day prior to her wedding. Unlike other cultures, this Kodava version of Mangalsutra is not tied by the groom, instead the bride’s mother ties it a day before the marriage.

This form of Mangalsutra is similar to that of Maharashtra. However, here the pendant is selected by the bride.

So, now you know the different Mangalsutra forms that is worn in the country. 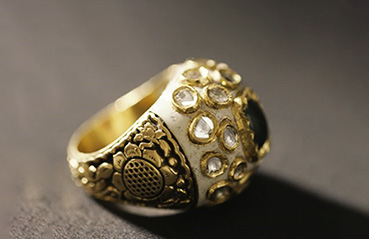 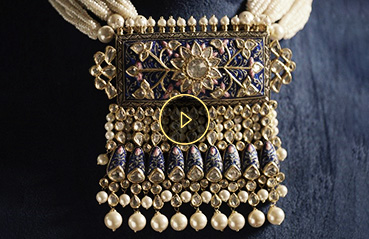