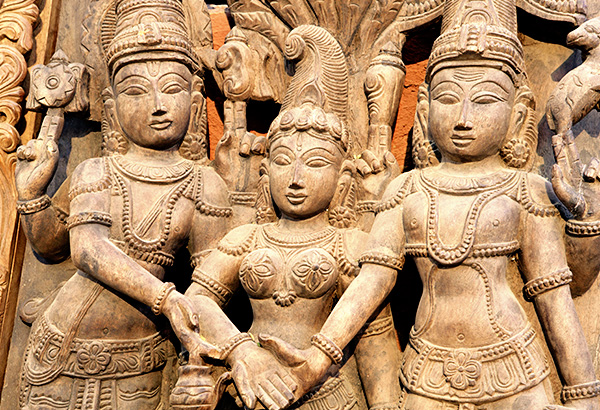 Gold has always played a huge role in Hinduism. There is a God and a Goddess for wealth and there is even a shloka that is said to cause a ‘gold rain’ in one’s house if chanted every day. The reference of gold can also be strongly seen in the ancient Hindu epic – Ramayana.

The book of Ramayana narrates the life of Lord Rama—the seventh avatar of God Vishnu—his wife, Sita, and brother, Lakshmana. India’s favourite precious metal played an important role in this story. The epic chronicles their travels across forests during the 14 years they spent in exile; Sita’s kidnapping by the demon king of Lanka, Ravana, and the war that ensues.

After the battle with Ravana, Lord Rama was taunted by one of his subjects who claimed that personal relationships were more important to him than his kingdom. To prove the subject wrong, he asked Lakshmana to leave Sita in the forest. But he had to perform yajnas (sacrifice) and it was impossible to do so without his wife. His spiritual master told him that he had to bring Sita back to the palace or remarry, both of which Lord Rama refused to do. Finally, his master suggested Lord Rama make a statue of Sita from pure gold for performing the yajna. Every time Lord Rama performed a yajna, he created a new gold statue of Sita.

Ravana’s uncle, Maricha, turned into a spotted golden deer to help him abduct Sita. The demon king, Ravana, had a Pushpaka Vimana- a flying chariot that was made from gold and controlled by his mind.

After Ravana kidnapped Sita, Hanuman went to Lanka to meet her. Sita asked lord Hanuman to take back a pearl mounted on a gold leaf and give it to Lord Rama.

Rama, Lakshman and Sita wore royal clothes, gold crowns, and gold jewellery before they were banished from the kingdom.7 While battling Ravana, the eagle king Sadayu said that he only feared Lord Vishnu, Lord Shiva, and the powerful gold ring worn by Sita.

The golden city of Lanka

The city that Ravana ruled - Lanka, was said to be made entirely of gold. Called the ‘Golden City of Lanka’, it had a huge mansion having golden walls on all sides and even had golden gateways. The city of Lanka was originally owned by the lord of wealth – Kubera.

It is a jewellery-making technique involving gold or silver made into tiny beads or twisted threads and arranged in artistic motifs. The wires are often fashioned into lace-like decorations adding charm to the jewellery.