Why is gold seen as insurance?

The golden ring of King Dushyanta

“One ring to rule them all, one ring to find them, one ring to bring them all and in the darkness bind them.” A quote any Tolkien fan will know. But right here in India, another story is told of a ring that reunited lovers.

There once lived a beautiful maiden named Shakuntala, the adopted daughter of Sage Kanva who lived in his forest hermitage. One day, Dushyanta, the king of Hastinapur, was hunting and shot an arrow at Shakuntala’s deer. She found her deer whimpering in pain and tried to comfort it. Her affection towards the animal touched Dushyanta's heart and he sought her forgiveness. She forgave him and asked him to stay with her to tend for the wounded deer.

In the course of time, they fell in love and married each other. Dushyanta gave her a gold wedding ring with his name on it and left for his kingdom, promising to return and take Shakuntala back with him.

A few days later, Sage Durwasa came to Shakuntala's door. He repeatedly asked for water but was paid no attention as she was only thinking of Dushyanta. The sage felt insulted and cursed her – the person whom she was thinking about would forget her.

As soon as she heard this curse, she begged for forgiveness. Hearing her plea, he said he couldn’t take back the curse but could change it. If Dushyanta was shown something of theirs, he would remember her.

With the curse taking hold, Dushyanta forgot Shakuntala. She decided to meet him at the capital, but on her way crossing the river, her gold wedding ring fell into the water. A fish swallowed the gold ring. When Shakuntala arrived at the palace, the king did not recognize her.

Ashamed, she started living alone in another part of the forest where she gave birth to a son called Bharata. Bharata was a brave boy who grew up among the animals of the forest.

Years went by and Dushyanta never remembered Shakuntala, until one day when a fisherman brought him a gold ring. He told the king that he had found the ring in the stomach of a fish and brought it straight to him. A single glance of the gold ring and the curse was broken. The king remembered Shakuntala and at once ran to her home, but could not find her. In despair, he returned to his palace.

Few more years passed. The king went hunting in the forest and was surprised to see a boy playing with a lion cub. The boy opened the cub’s mouth and said, "Oye king of the jungle! Open your mouth wide, so I can count your teeth."

The family was united and Bharata grew up to become a great king.

A guide to buying gold rings

Different forms of mangalsutra across the country 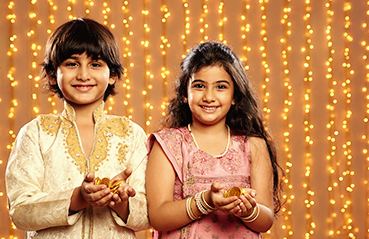