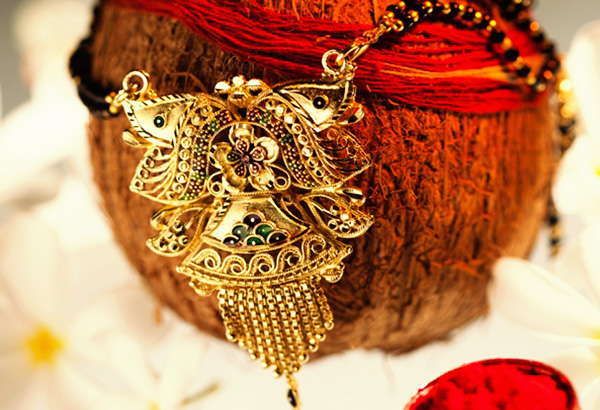 Marriage is the sacred bond of union of a man and a woman, and has a prominent place in the lives of Indians. Colourful ceremonies and opulent celebrations are common in wedding rituals across India. The tradition of marriage is much more than the wedding day celebrations; sacred rituals and customs are religiously followed by the families of both the bride and bridegroom.

Dejhoor: The married women from the Kashmiri Pandit community of Kashmir wear Dejhoor, which is considered the same as Mangalsutra. This gold jewellery is a type of earring which is suspended through both ears by gold chains that hang down to the chest, and symbolises wishing long life for their husbands.

Mangalsutra: This necklace is made in a variety of designs in accordance with the traditions of the caste and community of the married couple. Mangalsutra is the most common symbol of marriage.

Mangalsutra is known by different names such as Thaali Kodi in Tamil Nadu, Thaali (Hindus) or Minnu (Christians) in Kerala, Pustelu in Andhra Pradesh, Karthamani Pathak in Karnataka, Taag Paag in Bihar. It is called Mangalsutra in Maharashtra and Gujarat. Each Mangalsutra has a traditional or spiritual belief behind its design.

Bangles: The gold bangles are a part of “Solah-Shringar”, the sixteen adornments of a bride. The marriage bangles are usually different from regular bangles.

The married women from Maharashtra wear green glass-bangles that symbolize their “Saubhagya”, marital status. These bangles are worn with gold bangles known as “Patli”.

In West Bengal, the bride is adorned with shell and coral bangles called as Shakha Paula which are gifted by her mother. Seven married ladies perform this ritual of adorning the bride which symbolizes seven forms of Goddesses. Another customary bangle is Loha Bandhano which is gifted by the mother-in-law when the bride enters the new home. The affluent families, at times, encapsulate Loha Bandhano with gold.

Punjabi brides’ bangles are made of ivory and are called “Chuda”. These red and white bangles are gifted by her mother. The Chuda-wearing ceremony is a grand ceremony which is performed on the morning of the wedding day.

Similarly, the Gujarati and Rajasthani brides wear ivory bangles before performing the sacred ritual of “Saptapadi”, the seven vows of marriage.

Nose rings were first mentioned in Indian texts around the sixteenth century. Initially, nose rings were considered to be something that only Muslims wore, however, with the integration of Muslim culture, nose rings became an important part of Solah Shringar of Hindu brides as well.

The “Nath” in Maharashtra and “Nathadi” in Gujarat are gold nose rings that symbolize wedlock. In fact, the Hindi word ‘Nath’ means Lord, Master or Husband. In Punjab, the nose ring is supported by the chain, usually made of gold that represents the grace of married women.

The Nath can be of any size and may or may not be decorated, depending on the local customs and rituals.

The “laung” is a stud from Northern India which resembles the “Phuli” or “Mukkuththi”, a nose-stud from South, and indicates that the wearer is married.

Northern India calls the septum ring a ‘Bluaq’ (Hindi), while in Southern India, it is called ‘Bulakku’. This ring, similar to the Nath can be made in any size or shape.

The nose-piercing concept is more than mere ritual or tradition, it is believed by some that this process has health benefits.

According to Ayurveda, the left-side of the nostril is associated with the reproductive organs and piercing on this side eases delivery (child-birth) pain as well as reducing menstrual cramps.

As Gold holds an auspicious and respected status, it is always worn above the waist. Jewellery which is worn below waist such as toe-rings and anklets is generally crafted with silver or other metals.

The boiling point of gold is 2808 degrees centigrade.