Gold LookBook: A day out in style

“Should you buy gold?”

Even with Dhanteras and Diwali a few days behind us, it’s that time of the year when stories with the above headline start appearing in the Indian media.

But these stories just look at gold from the religious and the festive point of view. One of the most basic rules of investing is asset allocation. Depending on the amount of risk an investor is comfortable with, he or she needs to spread investments across asset classes, accordingly.

The reason for this is very simple. We live in an era of easy money. In the aftermath of the financial crisis of 2008, the central banks of the Western World led by the Federal Reserve of the United States started quantitative easing.

The idea was to flood the financial system with money, drive down interest rates, and encourage people to borrow and spend money, and corporates to borrow and expand. This would help businesses and bring back economic growth.

The people of the Western world were already coming out of one round of a borrowing binge.

So, they were not really interested in borrowing more, at least not immediately after the financial crisis struck. The companies, on the other hand, used the easy money era to borrow money and spend it on buying back shares.

The stock prices went up as the earnings per share of companies would go up as they bought back shares and extinguished them.

Other than this, the big institutional investors borrowed money at low-interest rates and invested it in financial markets all over the world. Many stock markets have continued to rally primarily because of this money, despite the lack of company earnings.

The Bank of England, European Central Bank and the Bank of Japan, have also printed money and pumped it into the financial system over the years, in the hope of driving down interest rates, and driving up consumption, investment and economic growth.

The quantitative easing did help push up economic growth in the Western world. In late 2016, the Federal Reserve decided to start pumping out all the money that it had printed and pumped into the financial system.

But concerns of slowing economic growth and a very aggressive American president in Donald Trump led to the Federal Reserve stopping its policy of pumping out the printed money.

In fact, the Federal Reserve now plans to print $60 billion every month and pump it into the financial system. The Federal Reserve sets the agenda for global central banks, and it won’t be surprising to see other central banks getting into money printing in the days to come and unleash another era of easy money, globally.

It is worth remembering here that gold is the anti-thesis to easy money. Hence, gold has already rallied by a little over 16% (up to September 30) in dollar terms during the course of this year. In rupee terms, the returns have been closer to 19% (as per the Indian Bullion and Jewellers Association) as the rupee has depreciated against the dollar. What this tells us is that investors were already factoring in the Federal Reserve going back to printing money, since the beginning of this year.

Along with the easy money policy, another international macroeconomic factor that we need to take into account is the international trade war that is currently on between China and the United States. If things get messier on this front, gold prices can rise further.

In 2018, China’s import bill stood at $1.7 trillion. Most of this trade is largely carried out in dollars. In the years to come, if the United States continues to impose tariffs on Chinese imports, China can influence its trading partners to start doing barter deals.

The broader point is that if Trump keeps treating China like he currently is, there is good reason for China to move its trade away from the dollar.

It’s the dollar which gives the US an exorbitant privilege after all; whereas every other country in the world needs to earn these dollars, the US can simply print them. The question is, is Trump willing to put this exorbitant privilege on the line? There is great fear among investors about this. If he is, then gold prices will rally further in the longer term.

In the Indian case, the economy has been in weak shape, making gold a great hedge against the weak performance of the stock market. Further, the growth of merchandise exports in India, in particular, labour-intensive exports which create growth, has collapsed. One of the reasons for this has been the strong value of the rupee against the US dollar. Keeping this factor in mind, the Indian rupee is widely expected to lose value against the dollar. A weaker rupee will drive up gold returns in rupee terms, in the near-term.

Keeping these factors in mind, it makes sense for every investor to have 10-15% of their portfolio in gold. Of course, it is important that like any other investment, one shouldn’t bet all the money one has on gold, but just a part of it, so that even in tough times, overall portfolio returns remain stable.

Vivek Kaul is the author of the Easy Money trilogy. 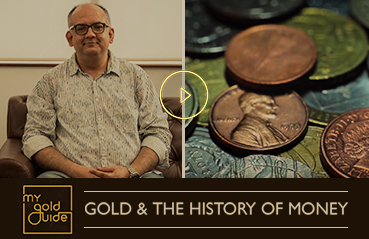 How and why did gold become money? 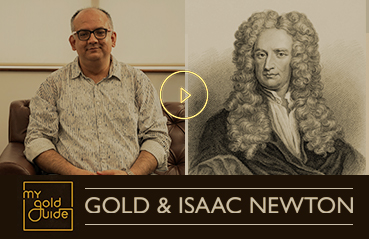 How did Newton make gold into a currency? 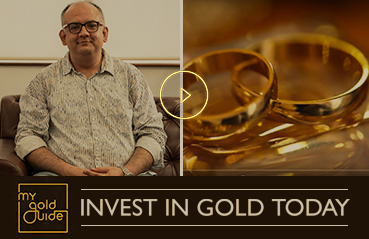 Why should you invest in gold today? 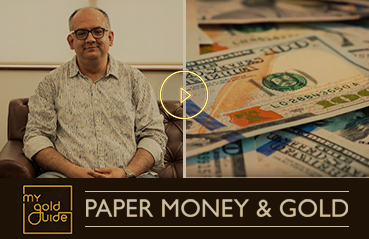 How is gold related to our currencies? 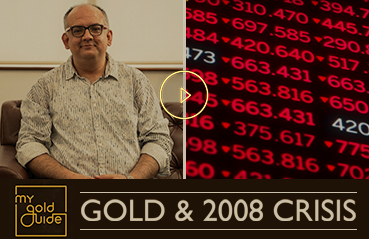 How did the 2008 financial crisis impact gold?